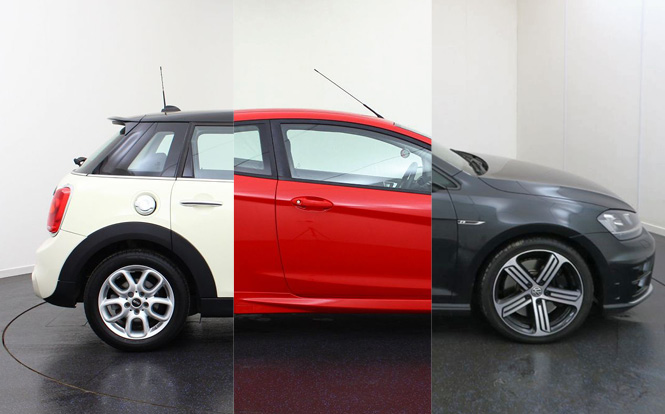 City living comes with its benefits and its challenges, and this is as true of motoring as it is of any other part of the urban lifestyle - so what are the best cars to choose as city runabouts?

Here are five of the top cars for city driving, including some all-time favourites and some of our own picks, to show why just because most of your motoring takes place on urban roads at low speeds, it doesn't mean you can't still drive in comfort.

The Ford Fiesta marked its 40th anniversary in 2016 and is still going strong, accounting for more than one in every 20 cars sold in the UK in 1976-2016 - a total of well over four million Fiestas over the four decades.

For 2016, Ford launched their fastest ever Fiesta, the 1.6-litre ST200, and clocked up the massive milestone of being the bestselling car every month for a solid seven years.

The Mini Cooper's compact size but zippy acceleration and manoeuvrability have made it an ideal commuter car for congested roads, and in 2017 the brand takes another big step forwards.

Mini's first plug-in hybrid model in the marque's history is the Mini Cooper S E Countryman ALL4, with an official launch date of June 24th 2017.

It's as speedy as ever, capable of hitting 62mph in 6.8 seconds, while on busy city streets the all-electric option cuts exhaust emissions to zero.

It's hard to resist the appeal of the Nissan Qashqai, which reaches its tenth anniversary in 2017 - the first urban crossover to reach a decade of production, according to the manufacturer.

The Qashqai has always aimed to deliver the practicality of an SUV in a body more similar to that of a compact hatchback, an ideal combination for city driving.

It's a versatile vehicle, agile enough for weaving through heavy traffic, while comfortable enough to take the whole family on a weekend getaway to the country.

The Toyota iQ is an excellent city runabout, with low enough carbon emissions to be exempt from road tax, and a relatively high number of miles to the gallon.

Fuel economy depends on driving style, and of course will be lower in stop-start urban journeys, but is typically quoted around the 50 mpg mark in real-world reviews.

The Toyota iQ is a good compact family option too, with space for a front passenger and two rear passengers, or three in the back with a little less seat space each.

The Volkswagen Golf is one of those cars that just goes from strength to strength, with continual updates and tweaks to the design by the manufacturer.

As of early 2017, this actually saw a decrease in average on-the-road asking prices across the range and urban-friendly carbon emissions starting from just a shade over 100 g/km.

The 2017 VW Golf continues this trend of looking to the future, with the introduction of gesture control and semi-autonomous features, all of which makes navigating city streets that bit easier.