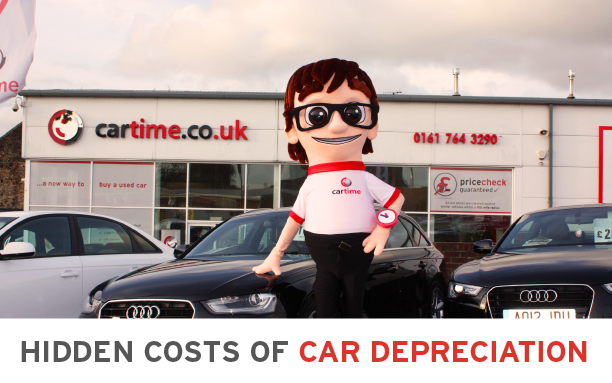 We’re all well aware that a fresh-out-the-factory car loses a lotta’ value as soon as it’s driven off the forecourt. But did you know that a typical brand new model can expect to lose around 45-50% of its value, in the first year alone? This shocking loss in value is known in the industry as ‘car depreciation’ and many drivers are unaware of just how costly it can be.

Car depreciation is the difference between a vehicle’s value at the time of purchase, and how much it’s actually worth when it comes to selling. As the motoring world braces itself for the release of the new 16-plate registrations, we know there will be a number of people across Britain considering buying a brand new car – but when you factor in car depreciation, these drivers might want to think twice.

Buying a brand new car is a costly affair – that flashy new plate might look great, but it certainly won’t come cheap. Many motorists justify this expense with reasons like fantastic fuel economy, claiming that newer cars save you money at the pumps. Well, factor in car depreciation, and drivers of brand new cars are actually left seriously out of pocket.

Car depreciation can actually cost the typical motorist up to three times as much as they would normally spend on fuel. Research from CAP Automotive shows that, in the first three years of ownership, a typical medium-sized family car will cost around £4,000 in fuel (based on an average of 12,000 miles a year). However, in just those first three years the car is expected to lose around £12,559 in value… Yes, that’s more than three times as much!

How to save the most money by choosing the right model

To gain the best possible savings over time, buyers should choose a model that will hold its value well, rather than focusing purely on fuel economy or a flashy new number-plate. Car depreciation slows as a car gets older, making a nearly new car (one to two years old) much better value than a brand new one.

Generally, it’s 4x4s and SUVs that hold their value better than other models. Electric vehicles are the worst by a long shot – and it’s typically these that people choose to buy to save money on fuel. Think very carefully before buying brand new. Yes, your number-plate might look great, but in 6 months’ time it’ll be yesterday’s news – and you’ll still be paying for it.

Buying a used car is a great way to cut costs and minimise car depreciation. We have over 400 models on our forecourt, many with just one previous owner. Our cars are in such shiny, pristine condition – you wouldn’t even know they’d been driven.

Visit our showroom, take a test drive and find out for yourself. With the money that you save you could pop a personalised plate on, and look great long after those 16-plates have gone out of date…