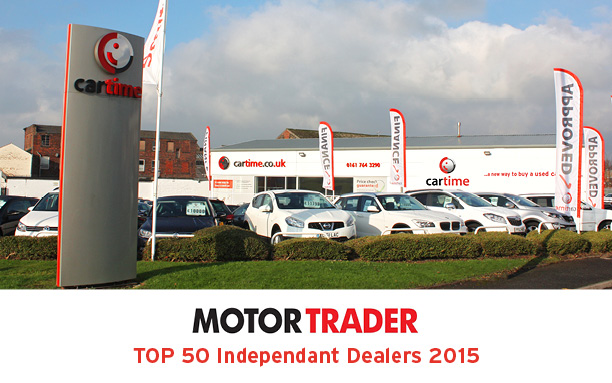 In their role-call of the Top 50 Independent Car Dealerships 2014, automotive magazine Motor Trader have added us into the running to make their future list later on this year.

Each year Motor Trader compiles a list of the top 50 independent car dealerships in the country, which takes into account the number of cars sold, the year’s turnover and the previous year’s turnover, amongst other criteria.

Although we narrowly missed out on making it into the top 50 this year, we were second on a catalogue of hot contenders to make it onto this year’s list. This is based on projections and estimates from last year, and given the growth of the company in recent months, we are confident that we will make the list this year. Not only that, but if 2014’s figures are anything to go by, we will hopefully feature in the top half of that list - if not, higher.

You may have already noticed, but this year we have been focussed on growing cartime by expanding the size of the dealership and improving on the already excellent levels of customer service we provide to our customers. Fingers crossed, with plans in motion for our exciting new collection centre, it won’t be long until this Bury Used Car Dealership is in the Top 10 (or at least that’s the hope anyway!).

The official Top 50 Independent Car Dealers 2015 will be published at the end of this year. Until then, we can only focus on our current plans - whilst providing our customers with ‘a new way to buy a used car’. After all, the people who will decide whether or not we make the cut will be the customers that select us as their used car dealer of choice.