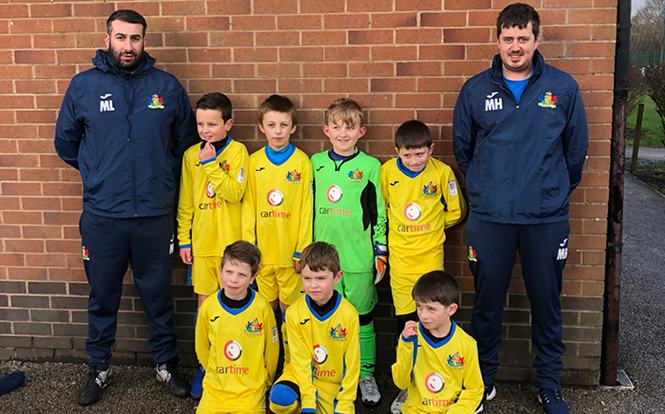 When cartime's head mechanic told us about his local under-8's football team, the Bolton County Hurricanes, we wanted to get involved with this talented group of young sports stars and help them to their next big win in one of the toughest local leagues for young players.

The U8's Hurricanes are one of the 34 teams who train at Bolton County FC, with squads ranging from under-6's to open-age senior teams, and girls' teams at each level and age range too.

Many of the club's teams have fierce names, like the Cyclones and the Dynamos, but we were really impressed by the Hurricanes, who are a true storm force in the Bolton, Bury & District Football League.

They are one of 40 under-8's teams from across the region who compete in the BBDFL's Section A, and that means a lot of fixtures before the under-8's league champions are decided!

The Hurricanes' recent form in this competitive division includes a massive 18 clean sheets and a 14-game unbeaten run, with 12 wins and only two draws along the way, which goes to show just how much talent is in this up-and-coming young squad.

With such impressive stats, we knew we needed to work with this talented team, which is why cartime are proud to be the U8's Hurricanes' new shirt sponsor for the season, our way to show our support for this local side from the moment they leave the changing rooms.

The cartime-sponsored Bolton County Hurricanes strip is a bright yellow shirt with blue trim and matching yellow shorts, as well as a bright green goalkeeper's kit, and the team look great walking out on to the field of play for each fixture with the cartime logo embroidered on the front.

It's a real honour to be involved with a local sports team in this way, and especially a young squad with the kind of skills and bright sporting future of the U8's Hurricanes, whose track record of wins and clean sheets really speaks for itself.

We are also glad to be able to feature the Hurricanes on the cartime blog, giving all of our customers the chance to see the team in their new sponsored kit - hopefully we might inspire some of you to go watch a game and show your support in person too.

With so much talent on display at such an early age, we hope cartime's shirt sponsorship sets some of these players on the road towards representing a Premiership team or perhaps even playing for England by the end of the 2020s.