cartime lads have a ball at Made in Bury Football Tournament 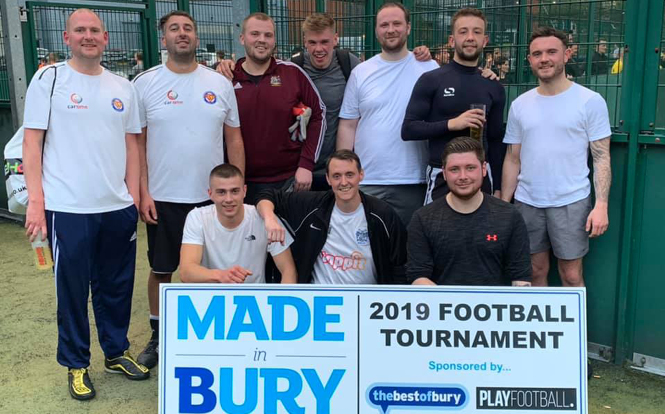 The lads from cartime were proud to put their best foot forward at the recent Made in Bury Football Tournament - and we're even prouder to say that we didn't lose a single game throughout the competition!

Our very own squad of Invincibles headed to the event at Play Football on Tuesday April 30th, with a team consisting of cartime's sales execs, mechanics, accountants and photographers, all ready to do battle for the title of Bury's best footballers.

We were up against other local businesses including a team from Bury McDonald's, as well as local charities like the Joshua Wilson Brain Tumour Charity, better known to many simply as #SuperJosh.

It was a hard-fought tournament and we're pleased with our performance, getting through all of our games without recording a single loss.

However, the standard was so high that even our unbeaten record wasn't enough to get a place in the final - in the end, we just didn't score enough goals and had to sit out the final!

That didn't stop us from having a great time throughout all of our games and the lads are now looking into getting kitted up to start a team as a more permanent cartime fixture, so you may well see us with our boots on again in the near future.

We've already got the perfect mascot - who better to cheer on a cartime footie team than our very own cartime Tim??

All in good fun

Although we didn't make the final, it was a great day and a great opportunity to meet up with teams from other Bury businesses and organisations.

In a thrilling end to the tournament, the #SuperJosh team were crowned champions after an impressive 5-1 win over the runners-up from 360 Vehicle Management.

After that it was time for all the teams to celebrate their various victories - and to forget about their defeats - over a few drinks and slices of Domino's pizza, a fitting end to a memorable day.

With our own respectable performance throughout the tournament, and the lads already looking to start playing more regularly, it's surely only a matter of time until we lift our first trophy too.

Proud to be a Bury business

At cartime we're proud to be a local Bury business, so it was great to see so many other local organisations joining in with a spirit of friendly competition.

We hope there will be a chance for a rematch soon, where we can hopefully go one better and make the final - if not walk away with an outright win!

Until then we'll be looking for other games and tournaments for our lads to enter now our team's been well and truly bitten by the football bug.

Watch this space - and soon enough, cartime Tim might become Touchline Tim as he cheers us on from the side of the pitch!

Thank you to Made in Bury for hosting the tournament, and we look forward to the next one.