cartime Give Away a Car on Key 103’s Heartless Hotline… But Did It Get Stolen? 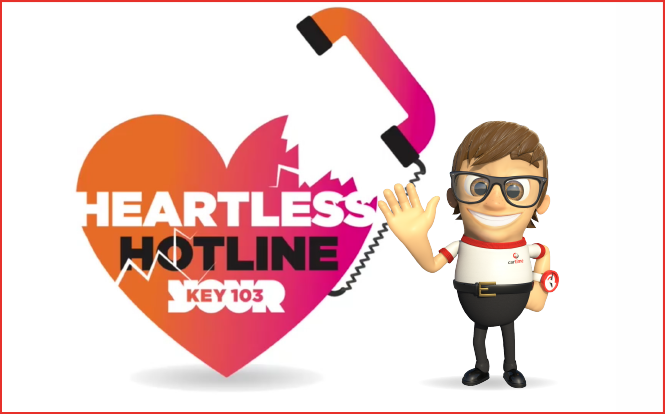 How mean are the people of Manchester?

With the launch of its latest competition Heartless Hotline, Key 103 is giving its listeners the chance to steal prizes from each other – but are the people of Manchester really mean enough? We donated a car to a mum-in-need and then had to listen out to see if anyone was stingy enough to steal it!

Heartless Hotline started this week on Key 103’s breakfast show, hosted by Mike Toolan. The game gives listeners the chance to win their dream prize; all they need to do it call in and explain why they really deserve it. Then, in a wicked twist, Key 103 gives the audience 30 seconds to ring in and steal the prize away.

Did Jane from Bury win her prize or was someone prepared to steal?

Tuesday’s show featured Jane from Bury, whose dream prize just happened to be a car. We stepped in to help, donating a gorgeous Toyota Yaris, which we knew would be ideal for Jane and her two small daughters. Jane was overjoyed, but it’s the Heartless Hotline remember – the phone lines were soon open for someone to call in and snatch the prize for themselves.

Just a few seconds into a nervous wait, the phone rang – but was the person on the Heartless Hotline really going to steal Jane’s prize? Luckily we’ve got the clip below, so you can listen and find out for yourself!

Jane’s dream prize was a car, kindly donated by cartime.co.uk . Would YOU have taken it for yourself? Tune in to Heartless Hotline weekdays at 8:10am

Will there be scandal across the city?

Presenter Mike said, “I’ve hosted a lot exciting competitions over the years but none has had me on the edge of my seat quite as much as this. The true nature of our listeners will be revealed… It could go anyway, there could be scandal across the city.”

The programming director of the show Chris Pegg said, “This is going to be seat-of-your-pants radio, nothing like this has ever been done on UK radio like this before and it’s going to get Manchester talking”. And he’s not wrong!

How heartless are the people of Manchester? Listen to find out! You can also tune into the show, weekdays at 8:10am.