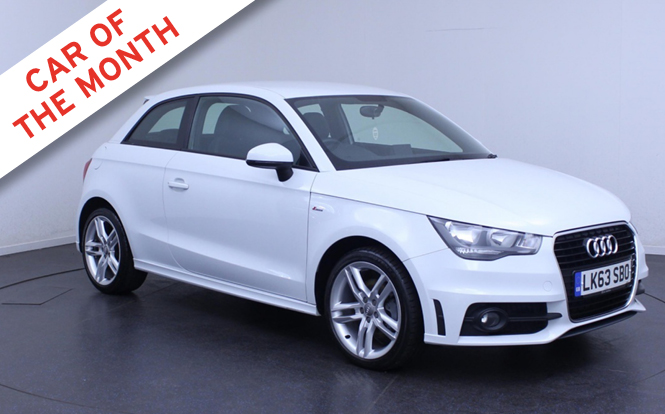 It's a hat trick for Audi as we have chosen the Audi A1 as our Car of the Month for December 2017, closing out a quarter of Audi dominance for this coveted title!

Back in October it was the Audi A3 that impressed, while in November we celebrated the Audi TT; now as we near Christmas we have some great Audi A1 finance deals to choose from, so it's a good time to put this iconic model in the spotlight in its own right.

A Decade on Top

We are in some ways marking a decade of the Audi A1, as it started life at the 2007 Tokyo Motor Show as the Metroproject Quattro concept car.

A year later it had evolved to become the Audi A1 Project Quattro in Leipzig, while at the 2008 Paris Motor Show the A1 Sportback Concept made its first appearance.

In 2010 the Audi A1 officially hit the market as a three-door, with the five-door Sportback coming about a year later.

Since then the model has gone from strength to strength - and with many of those earliest A1s still on the roads, it's a sign of a car that's built to last.

How much does an Audi A1 cost?

At cartime, we have some great used Audi A1 finance deals to choose from, with prices from about £9,000 upwards - quite a saving on a car that may only be a few years old.

Pay up to around the £14,000 mark and you can get a more recent model with only half as many miles on the clock, and we often see examples in great condition that have only done 20,000-25,000 miles.

Many Audi owners are rightfully proud of their vehicle, and we get plenty of trade-ins that are still in excellent condition, although of course we always put every car through our complete mechanical check before we list it among our used Audi A1 deals.

If you're a fan of the Audi A1 too, why not take one for a spin? We welcome advance bookings of test drives so that you can take the wheel and get out on the roads in one of our used Audi A1s before deciding whether or not to buy it.

We're also currently offering £20 Love2Shop voucher for everyone who books a test drive in the run-up to Christmas, so don't miss out on this chance to boost your spending budget for Christmas presents too!

Our exact selection will vary depending on what's in stock and what's already sold, so check our website for a full listing of our latest Audi A1 finance deals, complete with details of the cash price or monthly repayments for hire purchase and PCP packages.