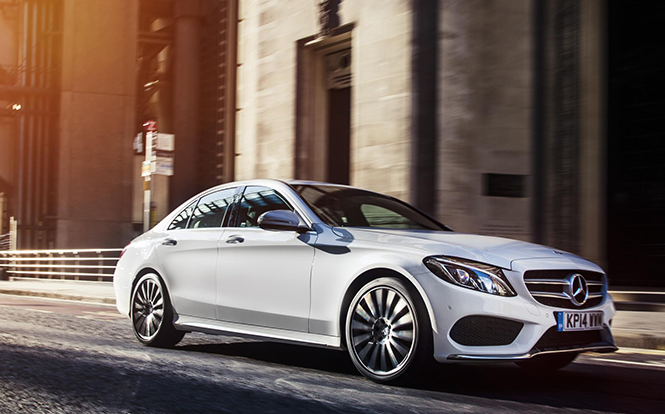 As we get our Car of the Month series underway for another year, there's no worthier winner of January's title than the Mercedes-Benz C-Class, a modern classic that has sold over a million units since the 'new generation' Saloon and Estate models were introduced in 2014. Together the C-Class Saloon and Estate frequently top the best-selling Mercedes-Benz models, with November 2016 just one example of a recent month in which that happened.

The 2014 redesign of the Mercedes-Benz C-Class Saloon introduced a driving experience akin to the feeling of a business class flight, with roomy front seats for the driver and passenger to settle back into for a comfortable journey even over long distances.

Five metallic circular air vents along the dash bring to mind the overhead vents of an air conditioned aeroplane too, while contrasting with the natural materials like leather and inlaid wood, while on automatic models a sweeping centre console panel provides a seamless bridge from the vents to the arm rest.

The head-up display was also introduced for the first time in the 2014 Mercedes-Benz C-Class, taking the experience from commercial airliner to jet fighter with crucial information displayed within the driver's field of vision, rather than requiring a glance down at the dash.

Info displayed in the head-up position ranges from the car's speed to satnav directions and even warnings about the local speed limit - helping business users to avoid getting a ticket while on their way to a meeting, and private owners to keep within the legal limits while out and about on a pleasure drive too.

As of 2016 the Mercedes-Benz C-Class family had grown to include four main body types, including the four-door sedan/saloon and five-door station wagon/estate, and two-door coupe and convertible models, allowing the C-Class to cater for everything from daily family use to sportier driving tastes.

This hugely popular line-up shows no signs of slowing down anytime soon, making it the perfect pick to see in 2017 as our January Car of the Month, ahead of no doubt another year going from strength to strength.

Find out for yourself by test driving one today, give the team a call and we’ll get you booked in.