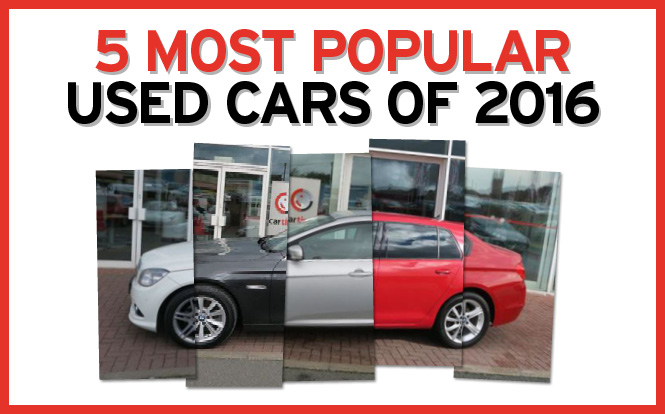 With the latest models rolling off production lines every day in the UK, lists of popular new cars see different entries all the time. As for the UK’s most popular used cars, the list is normally pretty standard – with a few familiar faces cropping up time and time again.

Director Matt Kay says this is for good reason – these models are reliable, give high performance and can be bought second-hand for surprisingly low prices. Here’s Matt’s list of the five most popular cars of 2016… So far!

The Mercedes C-Class has been a market-leader in the compact executive category for years. These models look great and offer a superbly comfortable ride - inside you’ll find an upmarket interior, and a vast array of technological toys for you to enjoy.

Matt says: “A C-Class is a fantastic car for solid reliability. The diesel engines offer excellent fuel economy – they might be a little noisy but a true motorist won’t mind. These cars are classy, comfortable and relaxing to drive.”

The 5-series is arguably BMW's greatest all-rounder, so its entry on to this list is no surprise. The 5-Series is hailed as being a classy and refined executive saloon, with remarkably low running costs and a range of excellent engines available.

Matt says: “The 5-Series is the 3-Series’ big sister – with more space and comforts, yet only slightly more expensive. There are few cars that have such a wide range of talents, as it’s great to drive, well-built, exceptionally comfortable and competitive on running costs.”

Ford calls its Focus ‘the best-selling nameplate in the world’. There’s a reason the sight of a Focus is as common a sight on British roads as a roundabout or set of traffic lights… These family cars are reliable, robust and fantastically good-value when bought second-hand.

Matt says: “We couldn’t compile a list of the UK’s most popular used cars and not include the Ford Focus. You can bag a model for next to nothing, and as they’re cheap to run and spacious enough for a family of four, the Focus is a solid buy.”

Despite the recent emissions scandal, the VW Golf remains a very popular choice for UK motorists. It’s spacious, simplistic in its design and affordable to run – so what’s not to love?

Matt says: “The Volkswagen Golf is one of the most accomplished used cars you can buy for your money. Inside there’s a high-quality interior, and both petrol and diesel options are efficient and quick. The Golf is a refined car that delivers everything you expect of it – and more.”

Auto Trader coined this car as the "undisputed king of the compact executive class" – taking a closer look it’s no surprise that it tops the table of most popular used cars. There are models available for all budgets, and with a wide range of petrol and diesel engines, plus models available for all budgets, it's easy to see why it appeals to so many second-hand buyers.

Matt says: “While each model on offer may vary, the core values of the 3-Series remain the same – the same as they have been since 1975. This isn’t so much a car, it’s more of a statement-maker. For a list of the UK’s most popular used cars, there could only be one winner – and it would always be BMW’s fantastic 3-Series.”

So did your favourite model make the list? Don’t forget to let us known on social @cartimeBury or www.facebook.com/cartimeBury. Fancy owning one of these for yourself? Browse from over 700 makes and models online.