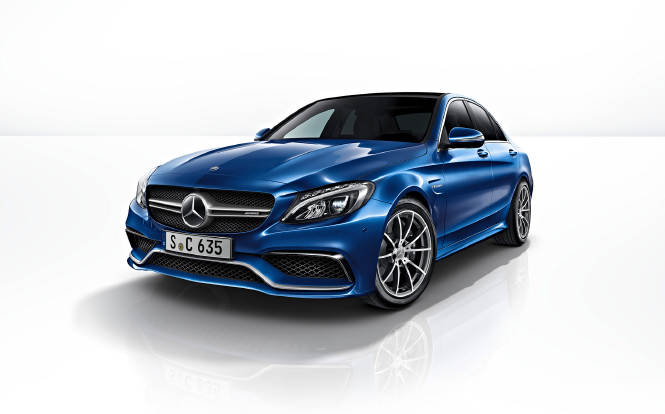 It was first unveiled at the Frankfurt Motor Show back in September and ever since then, Team cartime has been lusting after Mercedes’ latest offering – the Mercedes-AMG C 63.

This super-coupe pumps up the swooping profile of the two-door Mercedes C-Class. Although the body still flaunts the smooth lines that Mercs are renowned for, the shape of the front bumper has been revamped with much beefier-looking air intakes. Thick, chunky side skirts, larger wheels and the tell-tale quad exhausts mark out the model as the AMG-tuned version and the body is finished with a flourish in the form of a tiny flicking boot spoiler.

And does it sound as good as it looks? You bet it does. Nestled under that gleaming bonnet is a growling 4.0-litre bi-turbo V8 that packs a serious punch, with the base-variant producing 469bhp and 650Nm of torque. As if that wasn’t quite enough muscle, the ‘S’ model delivers a whopping 503bhp and 700Nm – it’s capable of firing from 0-62mph in 4 seconds.

AMG’s answer to the BMW M4

Mercedes engineers have admitted that they could have shaved a few more tenths of a second off that time, had they made this model a four-wheel-drive. However, any AMG purist will be pleased to hear they’ve stuck to their traditional real-wheel-drive configuration. Besides, it’s still .3 seconds quicker than its rival, the BMW M4.

If you’re forking out for a brand new Mercedes-AMG C 63, you can forget about putting your foot down on an icy morning; so much power behind those two back wheels means that this is a car that demands respect. Critics claim that in real-world driving, you’ll struggle to exploit even half of the Merc’s true potential, and as standard, the Coupe comes with a 155mph limiter, but don’t you worry – you can pay Mercedes to remove the limiter so that this little runner can reach up to 180mph.

Acceleration (and safety) has been improved, thanks to chunkier 255mm-wide front and 285-mm back tyres. AMG has squeezed these in by adding some divine flared wheel arches, and the whole look makes the model appear as if it’s literally snarling with attitude.

The sleek new model lands in Mercedes showrooms this month, so we thought what better way to honour this beautiful bit of kit than to make it our director Matt Kay's Car of the Month for March. Expect to pay around £60-£70,000 for the pleasure, plus a little more to lose that limiter.

If your budget won’t quite stretch to a brand new AMG, we’ve got a load of tasty Mercs at a fraction of the cost of the C 63. Our models should be just enough to whet your AMG-appetite, whether you’re after a C Class, E Class, SLK or M Class. Don’t forget our car finance offers are available on our Mercedes too, so you can make your next Merc even more affordable.