Car of the Month... Kia Sportage 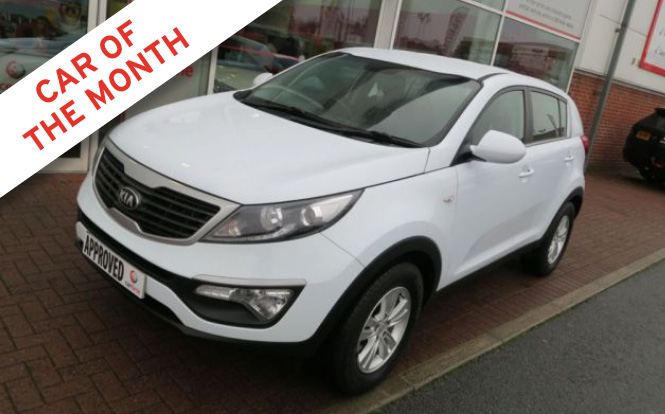 This month, we’re feeling sporty… So, we’re making way for the Kia Sportage.

The Sportage counts some excellent rivals among its competition, including the Nissan Qashqai, Mazda CX-5, and the Ford Kuga. After years of fine-tuning and finesse, the humble Kia Sportage has finally secured its position as a major player in the compact crossover class.  While the other models all have their own strengths and weaknesses, for us, the Sportage has more than just a sporting chance of making the top spot. Which is why it has!

The early days model began life as a rough-and-ready 4x4 mini-‘ute’ or utility vehicle, but now it’s become a refined, fashionable and feature-packed car that’s also cracking to drive. Arguably, this car has done the most to change Kia’s brand image – as the third-generation Sportage (2010-2016) showed that Kia could make attractive, stylish and great value cars all backed up by an impressive seven-year warranty.

What’s the score under the hood?

Base engine is a 2.4-litre I4 that delivers a commendable 181bph. Fancy a little more juice? The engine upgrade is a 2.0-litre turbo-4 that’ll give you 240bhp. The car itself offers sturdy handling and more than adequate power, making the Sportage feel like a smooth rocket.

The later generation Sportage also has new chassis that is notably stiffer, so road-feel is proportionally more solid, and easily more agile feeling than its main rivals. Steering wheel controls also rate very well, and the wheel itself has a beefy feel to it.

And in the cabin?

There’s both bountiful room and comfy, spacious seating up front for driver and passenger. An increase in overall size allows for additional space to the rear of the cabin too. The design looks fabulous, appearing richer than class average with flashy black and white styling. There’s a myriad of controls, as well as the available UVO 8-inch touchscreen. It’s busy, but Kia delivers everything you need in a clean, flowing, easy-to-use design.

The exterior has had a stylish makeover and pays unmistakable homage to the mighty Porsche Macan. Although this model has clearly influenced shape the Kia Sportage still retains kinship with its larger cousin, the Kia Sorento; which is especially true at the front end, as the car sports a pinched grille and high-mounted slant-back headlights.

Although it’s only available in one five-door body style, the Sportage does come with a choice of two- or four-wheel-drive, and a comparatively broad spread of petrol and diesel engines. There are also options for six-speed manual, auto, and seven-speed dual clutch transmissions, so whatever your preferred choice or power, there’ll be an option for you.

Kia’s efforts to top the crossover class are clear with the latest Sportage. Find out for yourself by test driving one today, give the team a call and we’ll get you booked in.