cartime take on The Crystal Maze for Cash for Kids! 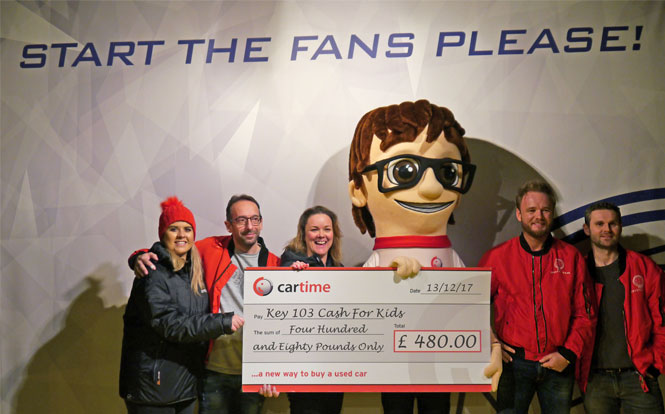 The cartime team, ably assisted by mascot cartime Tim, were recently joined by volunteers from Key 103 and Cash for Kids for a gold-winning run on The Crystal Maze.

As well as collecting toys and donations for Cash for Kids, cartime have donated two cars to deliver all the donations to kids' homes in time for Christmas, and wanted to make a donation of their own.

Together they scooped a full complement of crystals and headed to the Crystal Dome for the familiar cry of "Will you start the fans please!"

The plan was to donate £1 to Cash for Kids for every gold token won, and with their time in the Dome, the team managed to grab a grand total of 240 tickets - but Matt decided that wasn't enough.

So in the end he doubled the winning total, bringing cartime's Cash for Kids donation to a healthy £480.

It's not too late to make a donation, but time is running out to head down to the drop-off point at cartime and donate some toys or baby gear to the cause.

Alternatively, you can still donate cash too - helping kids in poverty to have more to celebrate this Christmas.