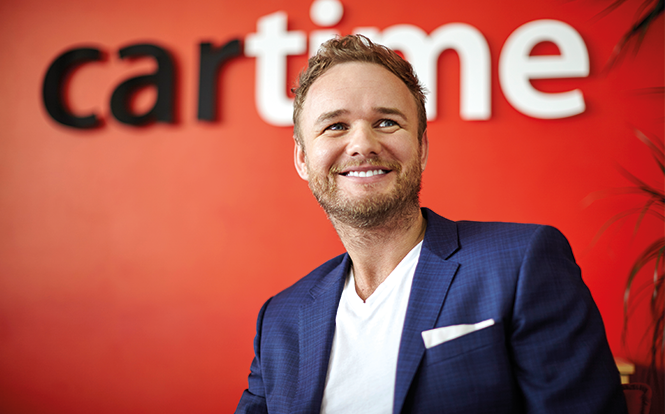 From humble beginnings, selling cars from his mother’s driveway, Managing Director, Matt Kay established cartime, one of the North West’s biggest independent used car dealerships. During 5 years of trading, we have experienced continued year-on-year growth and in 2016 appeared as a new name on the highly regarded “Top 50 Independent Dealers” list for the UK.

Fascinated by cars from an early age, and always keeping a close eye on local classified car ads, a young Matt turned his hobby into a business venture. Purchasing his first car at the age of 20, a J Reg Fiesta from an auction and selling for a profit of £160.

“I purchased my first car from an auction in Blackburn when I was at university with my student loan. I enjoyed the excitement of the auction and making money was just a bonus, while studying for a Business Degree at Staffordshire University.”

At 22, Matt had around 15 cars for sale, outgrowing his mother’s driveway, selling them from local car parks and storing them at nearby garages. It wasn’t until a few years later that Matt aquired his own forecourt with space for 60 cars.

“My first dealership was in Blackburn which I ran for 5 years. I learnt a lot, but knew the site wasn’t going to be big enough to grow to where I wanted to be. I had a vision to create a car supermarket with over 500 cars.”

What seemed like the perfect opportunity came in 2012 when Matt discovered an old Vauxhall dealership for sale on Bell Lane, Bury. This was the start of cartime. Today, cartime has over 700 used cars with a selection including Audi, BMW, Mercedes, Land Rover and other well-known brands - all hand-picked by Matt himself. “My aim at cartime has been to create a new way to buy a used car by offering main dealership service and after sales at affordable second hand prices.”

As we approach our 6th year, the business model is going from strength to strength. With continuous growth, we’re not showing any signs of slowing down. We have big plans for the near future.

In October 2016, we unveiled plans for a multi-million pound rebuild of our current site. This would include an indoor 40-car showroom which would be twice the current size, with the ground floor alone covering 14,000 sq. ft. To support this, cartime has also acquired a 70,000-sq. ft. mill, which can hold up to 300 cars and act as an off-site collection centre.

cartime are now considered one of the largest independent dealers in the North-West and certainly a business to keep an eye on in the coming future.