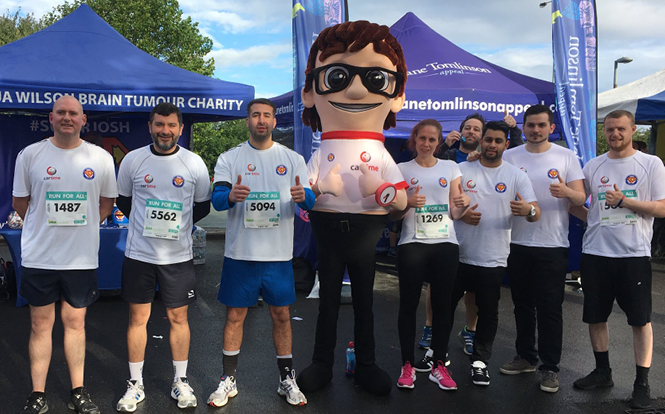 Several members of the cartime team parked our wheels and took to the streets of Bury on foot, on September 17th in aid of The Joshua Wilson Brain Tumour Charity - better known to many as SuperJosh.

SuperJosh was just one of the charities supported through sponsorship in this year's Run For All Bury 10k, which got underway at 9:30am on Sunday.

The run was open to anyone aged 15 or over on race day, but with pacers setting target times of anywhere from sub-40 minutes to sub-70, the cartime runners had a point to prove.

Chris Thomas, our Senior Technician set cartime's fastest pace at 53:25 for the full 10k, with his colleague Niall Downes close behind on an official time of 54:00. Julian Brejwo also broke the hour mark on 59:31.

Also running was Matthew Livesey, who came home in a time of 62:11 and Fiona Gardiner at 79:15. Great work team, we are really proud of you all.

Of course, while the run was a personal challenge for our team, more importantly, it was a chance to raise funds for SuperJosh, our chosen charity.

The Joshua Wilson Brain Tumour Charity does crucial work to support the parents and families of children who are diagnosed with brain tumours, including those who are left with disabilities following their condition or treatment.

Joshua was diagnosed aged three and a half, and surgery to remove his tumour left him with multiple physical needs and an ABI - an 'acquired brain injury'.

When the tumour returned, Joshua underwent chemotherapy, but continued to not only persevere with his condition, but to overcome his unique challenges, including finding new ways to communicate non-verbally.

SuperJosh became particularly well known for giving the thumbs-up sign in place of the word 'yes', and the hand signal has become the symbol of the charity's 'thumbraising' efforts.

On August 10th 2017, Joshua's family celebrated his 17th birthday - the fifth since the charity launched just before his 13th birthday, and the third since his death in late 2014.

We are proud to be able to support the continuing 'thumbraising' work done by Josh's family and by everyone involved with this incredible charity, who not only keep the memory of SuperJosh very much alive, but who are also helping to improve the lives of children and their families who are coping with a similar condition.

The charity is one of seven official beneficiaries of the Bury 10k, alongside Early Break - The Young People's Drug & Alcohol Service, the Jane Tomlinson Appeal, Bury Hospice, Home Start - Support and Friendship for Families, Annabelle's Challenge and Bury Involvement Group in Mental Health.

It is the second time the now-annual run has been held in Bury, and following the inaugural event in 2016, the organisers said that the charities supported that time around were the "biggest winners" on the day.

Some - including SuperJosh - have benefitted in both years so far, and with the date already set for the 2018 Bury 10k, it's back to the treadmills for our team as they look to smash their times 12 months from now, while helping to raise even more funds for these very worthy causes.