Audi A3 and Cabriolet are our January Car of the Month 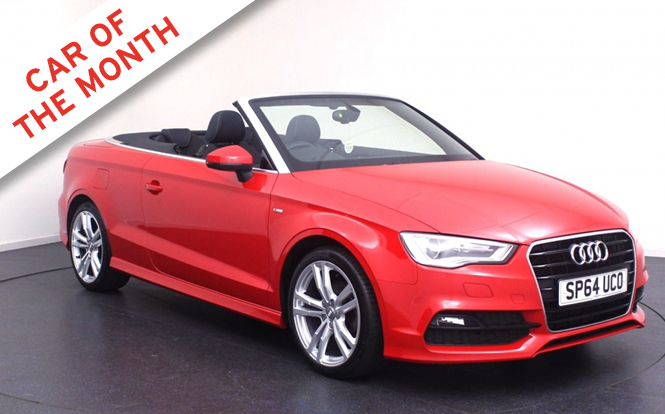 A great-quality used Audi A3 is among the most fun you can have for less than £20,000, with prices dropping by nearly two thirds for slightly older and higher mileage examples, still in excellent driving condition.

With the Audi A3 still the pride and joy of many motorists after over two decades in production, and the Audi A3 Cabriolet marking its tenth anniversary in spring 2018, it's the ideal time for us to celebrate the A3 as the cartime Car of the Month for January 2018.

History of the Audi A3

Production of the Audi A3 started back in 1996, with the first vehicles delivered to UK customers in November of that year.

Early examples now may look similar to the VW Golf Mk4, as the two were built on the same Volkswagen Group platform, although the A3 launched first and had a sporty, three-door hatchback body.

Current new-model Audi A3s are part of the third main generation of the car, which has been in production since late 2012, and the body options now include three-door and five-door hatchbacks, as well as a four-door saloon.

About the Audi A3 Cabriolet

So what about the Audi A3 Cabriolet? This was announced in late 2007 with UK deliveries starting from the following spring, and was billed as "the first-ever premium compact class open-top from Audi".

Five years later, the Cabriolet was officially retired with the launch of the Audi A3 Cabriolet Sport and S line 'Final Editions' in early 2013 - although an all-new A3 Cabriolet was announced before the end of the same year.

It remains one of the four main body types in the A3 family for 2018 - comprising the Audi A3, A3 Sportback, A3 Saloon and A3 Cabriolet.

Of course, all of these used Audi A3 finance deals come with a pay monthly option that can get you behind the wheel from as little as about £160 per month, rising to roughly twice that for a top-end Cabriolet.

Hire Purchase arrangements will typically run for longer, but mean you own the car after your last instalment.

Alternatively, if you're looking for an Audi A3 as a stop-gap before upgrading in a couple of years' time, Personal Contract Purchase could be the right option for you.

With this you are committed to a shorter arrangement and, at the end of your instalments, you have the option to pay a final balance of several thousand pounds to take full ownership of the car, or hand it back with nothing more to pay - you can even use it as a trade-in if there is any leftover value in the vehicle, making it easier to get a newer model using a new used car finance deal or bought outright.